Understanding Yourself & Others: Ego-States - Transactional Analysis

The Transactional Analysis (TA) ego states represent the core concept of TA. This concept helps you analyzing states of yourself and others. If a condition is not suitable for you, you can also change it. But more on that later. In this article you will learn: 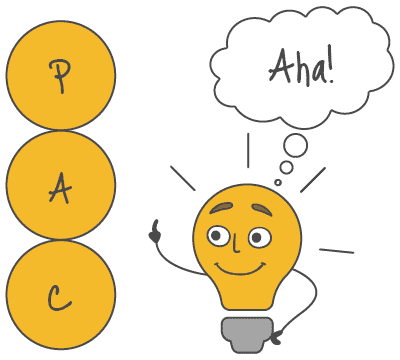 1. Introduction to the Ego States in Transactional Analysis - Structure Model

Ego states Transactional Analysis: There is a content model represented with three superimposed circles. In addition, there is also an expression model - the functional model. We will come to that later in the article. First, let's look at the content model: the lower circle describes the child ego state, the middle, the adult ego state, and the upper, the parent ego state. The content or structure model describes which contents (thoughts and feelings) and experiences have gathered in the respective ego state. Graphically shown, the ego states look like this:

The structure model of ego states in Transactional Analysis.

Let’s have a look at how the three ego states will influence you based on an example. Afterwards we will define them. Ready?

After the third "yes, but" you realize that you are annoyed. 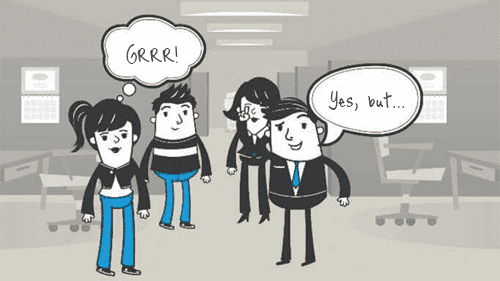 Maybe you were able to agree on a proposal in the end. Now you discuss fact-driven and maturely about how to implement the company celebration. You walk through different options and then make decisions.

Maybe you will then present the results to your boss. But he gets a fit of rage and asks you what this is all anout. Meanwhile you realize that you became anxious or even behave stubborn and unwilling to change anything.

You will agree with me saying that you have felt and behaved differently in each of the situations. Not only did you feel and behave differently, you also thought differently. Transactional Analysis calls this combination of thinking, feeling and behavior an ego state.

Each of the three ego states consists of a combination of thoughts, feelings and behavior. 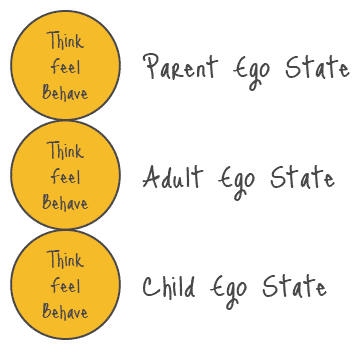 Each ego state consists of a combination of thinking, feeling and behavior.

All three ego states are referred to in Transactional Analysis as the ego-state-model. The three states together represent one person. In the content or structural model, the collected experiences of a human up to the present are assigned to different states. The Transaction Analysis divides the ego states into two models:

That's it regarding the structural model. Let's move on to the functional model:

The function model describes how a states manifests itself when it's activated. It subdivides the parent ego state and the child ego state and focuses on how the ego states are expressed.

But first another example:

You sit in your office and an employee enters without knocking. You're angry and say, "Are you not able to knock?"

Or, for example, a colleague carefully prepares a table with biscuits and coffee for the upcoming team meeting.

These are two examples of the same ego state, namely the parent ego state. This can be divided into: 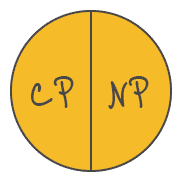 The parent ego can by divided into controlling and nurturing parent ego state.

Both have their positive and negative sides. They are positive if they enrich your life. Negative, when they prune your life.

The adult ego is not further subdivided. It is believed to be a reaction from the here and now that seems appropriate. For example, a factual discussion among friends or planning the upcoming work. 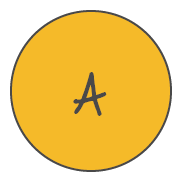 The adult ego state is not subdvided further.

The child ego state can be subdivided into the following three aspects: 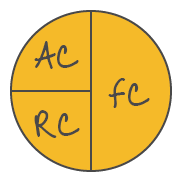 Each ego state has its positive and negative sides again. In summary, the detailed model of the ego states (function model) looks like this:

The complete function model of the ego states

We need all ego states to interact well and appropriately with the environment. With the aid of the differentiated ego states (function model), you can observe in which state you and your fellow human beings are. You can analyze yourself and that gives you the opportunity to behave in a different way. By recognizing other people's ego states, you can understand them better. These are the ego states Transactional Analysis.

3. Ego states as the Foundation of Analysing Communication

In the expression or function model, the content and experiences expressed are also used as a basis to analyze communication - the so-called transactions. Transactions show us how content influences our outwardly expressed observable behavior.

But what is a transaction?

It consists of the back and forth of information (for example, when speaking) between ego states of persons. When we use the ego states to analyze transactions, it may look like this: 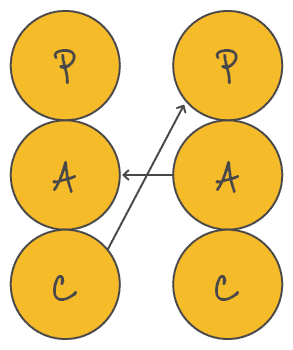 Exchange of a crossed transaction between ego states of two people.

Good to know: Sometimes a simplified function model is used to analyze transactions. We did this here too. In principle, it looks the same as the structural model (content model), because of the six ego states again becoming only three. This sometimes leads to confusion, even in the TA world. Here's a simplified illustration of the same transaction.

Although this "transaction model" (it indicates transactions) consists of only three ego states, they remain associated with the function model. Because the analysis of transactions is always observable. Therefore, the expression model of ego states can also be used. The distinction in this case is rather theoretical.

Each ego state model represents one person. There are two people talking. The arrows indicate from which ego state the communication starts (arrow beginning) and which ego state is invited to answer (arrowhead). The above example shows a crossed transaction. A crossed transaction is one of the three types of transactions. (The other two are parallel and duplex transactions.) From the child (1), the parent of the right person is invited (2) to respond. But this person decides differently and answers from the adult ego (3). The arrowhead points to the adult ego of the left person. Your adult self is invited to answer (4).

Example: A friend says grumpily, "I'm hungry!" and invites me to a reaction like, "Come on, don't overreact!" or "Let's quickly find something to eat." Since I decide though to answer from an adult ego state, my answer might be, "Oh, then you're probably already a bit tense. What do you want now?" With this question I invite my hungry counterpart to ponder on what he really wants to do.

Just by knowing about the ego states, you can change yourself. For example, if you notice that you are thinking and feeling like a child (anxious, helpless, sad, angry, etc.), you might opt for a new decision. For example with this question:

"How would I react, if I had access to my adult ego state?"

You can then decide to act on this. This will bring you closer to the ultimate goal of Transactional Anaylsis - autonomy.

Visually, by design, the structural model looks more simple than the functional model. It is, however, the much more complex model. It describes how the ego states came about and what happens internally.

I would now like to offer you a comparison of the two models. I copied an email that my friend and colleague Bernd wrote to me. I think it brings it to the point:

Structural model and functional model: It is like "car wheel" and "rotating". Let me explain that metaphor: Structural model: I can describe the composition of a wheel: rim made of steel/ luminum, rubber for summer/winter, tread depth, size, thickness of tires, etc. Practically, this means to conduct a "historical analysis". Connections in the childhood experience, self-developed beliefs from childhood experiences, introjections in the parent-ego, unreflected judgments, role models and in the Neo-Freudianism learned, consciously adopted, numbers/data/facts, etc. How it has become, the question arises: "What is in there?" Here, the counselor always depends on the client how much insight he gives. Everything the client gives has to be interpreted, so the evaluation of "what's in there" is always a hypothesis.

Functional Model: In contrast, the behavioral characteristics that a human shows are all observable. It's like the rotation of the wheel that we can observe. In short, only what is observable belongs to the functional model. Of course, there is a need to interpret the observation again. But this can be easily combined - the counselor's observation with the client's evaluation of the observed."

Here are some exercises for you to analyse your ego states.

You can find another exercise here: The Egogram. With it you can analyze exactly how much time you spend in which ego state and how you can change it. The ego states are one of ten concepts that are part of the online video course in Transactional Analysis. Have a look here:

This article was written by Steffen Raebricht in collaboration with Bernd Taglieber. If you have any questions or comments about Transactional Analysis ego states, just write us in the comments. We answer personally.