Life Script Transactional Analysis - Get the Most Important Facts Here 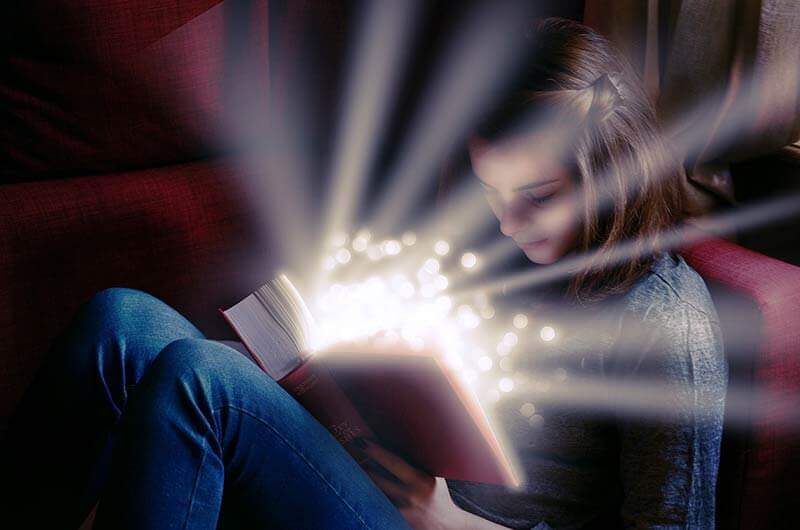 Definition: The script can be described as an unconscious life plan or as a life plan that you unconsciously created. If it remains unconscious, you may be aiming for a negative, neutral or positive final payoff. You can understand the term final payoff in the sense of how your life will run and what it will feel like when you do a final recap  ("That's going to end badly with me again"). In the beginning of Transactional Analysis, the term "script" was understood only negatively. In this article you will learn:

The Transactional Analysis life script arises in the childhood of a human being. In that period we develop our basic views of the world. It can be said that it is the foundation of our adult life. We make our earliest decisions when we can not even speak yet, soley on the basis of what we experience and the associated feelings.

In our first seven years of life we get a picture of:

Most people are unaware of that their lives are based on a self-written script. If you keep getting into the same uncomfortable situations, you may wonder if you are influenced by your script.

Script theory is an important concept of Transactional Analysis. It is so important because it helps explaining people's most important decisions and behavioral problems. If a person, from an external perspective, seems to act to her own disadvantage, one can assume that she is doing so because of her script.

Many Transactional Analysts consider the life script primarily a negative thing. Of course, our script also contains a positive side. The script can also allow us and give us ideas to grow inside. However, since there is a need for action especially in the case of harmful script portions, one usually concentrates on these parts of the life plan.

We create our script at a young age as a survival strategy. We need it as a child to structure time, space and relationships and outline boundaries. Without this structure we would be disoriented. We would not know where we came from and where we should go. The child would be like a leaf in the wind. A plaything of the environment.

Parents certainly contribute a lot to the shape of the script. But each person creates his or her own individual script. Ultimately, it is shaped and "decided" by the child and unconsciously "reproduced" as an adult.

Because it is not simply "prescribed" by others, it is also possible to make new decisions later and change one's life plan. For example, if you're tired of playing psychological games, you can opt for a new behavior after analyzing it. With such new decisions you change ultimately also change your script.

There are three ways to define the life script Transactional Analysis:

A person with a winning script achieves his/her goal and feels good about it. A person wanting to become wealthy, has a winning script when they have a lot of money and can enjoy life. One can also have a winner script as a non-possessing traveler - as long as one feels comfortable. Winning in Transactional Analysis does not imply that somebody else loses. It is rather a personal success.

A person with a non-winning script neither makes much progress nor much of a loss. These people take no risks. To stick with the example: they do not get rich, but they do not become impoverished either. Maybe such people ask themselves this question at the end of their lives:

Someone has a losing script when they don't reach their stated goal. It does not necessarily depend on the performance, but on the comfort or attitude towards what has been reached throughout their life. If that person wanting to become rich stays poor, they feel to have failed. Another example would be somebody who became rich but suffers from the wealth, maybe in the form of a burnout or from the feeling of never having enough money despite all the millions.

The division into winning, non-winning and losing script is just an approximation to reality. This concept is about individual perception. What losing means for one person, can be winning for another.

By the way, many European Transactional Analysts no longer believe in this subdivision. For them, it doesn't really fit into our present world of imagination anymore.

As a child, each of us wrote our life script Transactional Analysis, basically with a pencil. Most people do not know yet that there is an eraser and that they still have the pen. So you can erase and rewrite your script.

I've prepared a work sheet on this topic for you. Tell me about your experiences in the comments.

The life positions in the script theory consist of the two:

If you do not feel like reading, you can just watch the below video. In my basic course Transactional Analysis you will find more videos similar to this to dive deeper into the topic.

The term "Ok" in the Transactional Analysis related to a person being good. Often Ok is also abbreviated with a + and a not-ok with a -.

The two dimensions can be combined. This results in four different life positions. Eric Berne said that every fate relies on one of these four positions. They represent the basic attitude when it comes to what value we give ourselves or others. 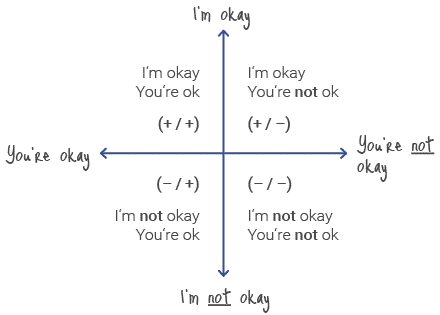 Example: Daniela arrives at a seminar. Other people are already sitting in the room. Her first thoughts may vary according to the four basic life positions she may have. For example:

The first + or - stands for your own basic position, the second sign  stands for the other person, in this example "the group".

In everyday life, we move back and forth between the four basic positions of life. However, we have a preferred position. Our favorite basic position, so to speak. This preferred view on life is part of our life script.

Book recommendation to the Life Script:

"I'm not so important anyway", "I'm guilty", "I think I'm too stupid": Three typical sentences that we internalize in early childhood, unconsciously believe and with which we make life difficult for us. The unconscious life plans that evolve from sentences like this are called life scripts in Transactional Analysis. Claude Steiner in "Scripts People Live" analyses the most common script patterns and gives advice for leading a happy personal and professional life.

Now you'll learn from which factors a child derives their script. It is created through messages that they internalize forming a certain judgement or idea about:

Most messages are unconsciously passed on to and received by the child from parents or other caregivers. Often, the parents have also taken the messages from their parents unconsciously. This can lead to familial behavior. Until someone makes a conscious or unconscious decision and changes something they remain unchanged.

Scripting messages can be conveyed verbally, non-verbally or in combination. These can be, for example:

These are factors that influence a child's script-building. You have now hopefully gained a first overview of the topic of life script in Transactional Analysis. The article was written by Steffen Raebricht and Bernd Taglieber. If you have questions or comments, write us in the comments. We answer personally.