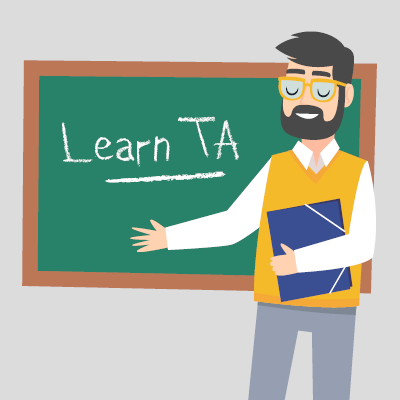 1. Training in Transactional Analysis - Your Options

There are two common methods how to learn Transactional Analysis (TA) at the moment. You can choose between:

Both methods have their advantages and disadvantages. Especially for beginners I recommend my online course. It gives you structure and a very clear overview of Transactional Analysis. Like this, you get to know the concepts first. In addition, the online course has other advantages such as time flexibility and cost savings.

For introductory purposes, as I said, I deem an online course suitable. I've prepared a spreadsheet for you to compare online and classroom courses. 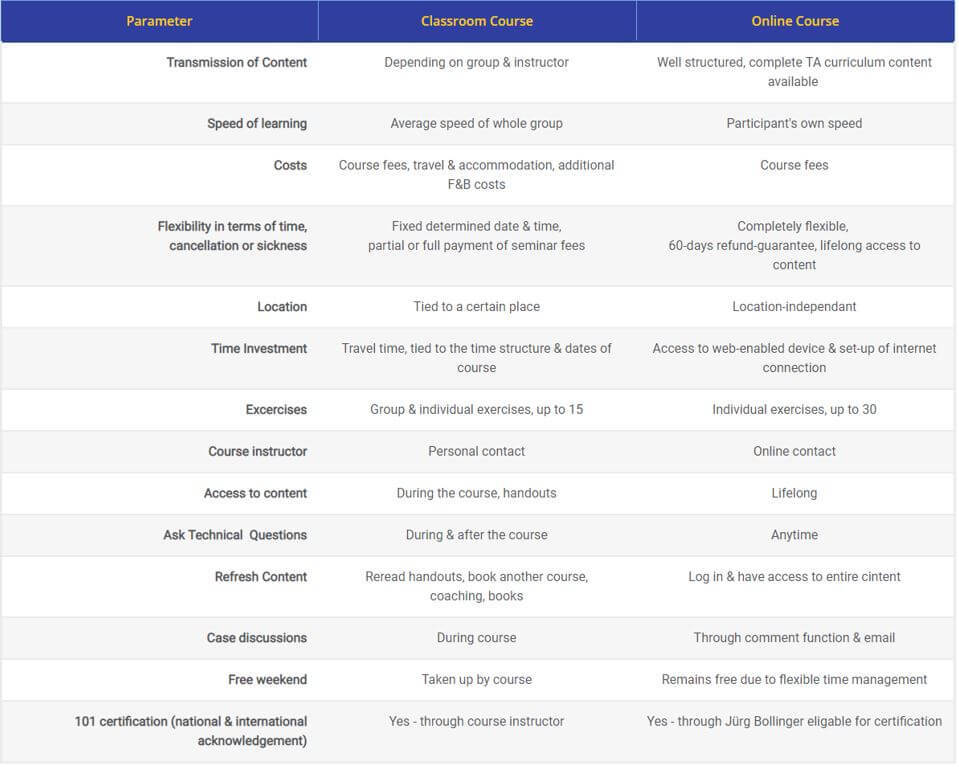 In favor of the classroom courses one can of course emphazise the personal exchange between the participants and with the trainer. This creates a good TA atmosphere. However, I strongly believe that online learning is more appropriate for learning the models and the first application.

How I First Got in Touch with Transactional Analysis

I sat in the seminar room, with me 15 other participants. We were on the Neurolinguistic Programming (NLP) Trainer Course. We introduced ourselves and talked about our jobs. At the time, I was in the middle of my university studies. One of the participants said he was a "Transactional Analyst". That was in 2009. It was the first time I had heard this bulky term. The Transactional Analyst and I became friends. He had all kinds of interesting views and I wanted to learn more. He gave me a book - "The Transactional Analysis: An Introduction". The next month I was busy reading it. It's written very simple, but it's rich in content. I had trouble grasping the concepts presented. Fortunately, I talked to my new friend from time to time. He helped me to better understand the concepts described. I got a first idea - behind the deterrent word "Transactional Analysis" there could be something very useful.

My TA-friend, Manfred, invited me to southern Germany. He gave an introductory workshop where I would be able to learn Transactional Analysis, the TA 101 course. I really wanted to participate in it and Friday afternoon was when we started. That was in 2010, a year after I first heard about TA. I still remember that we did a lot of exercises. In one of them, we were supposed to change the ego state and I was not able to get out of my parent ego state. I still shutter thinking back to this moment. The workshop was good - I received short introductions to different TA concepts. What I lacked - and I could not name it at the time - was an overview of Transactional Analysis. How could I systemize and classify the concepts? Since I prefer to understand things first with my head, I lacked orientation.

Later in the training, after a couple of months, I read the manual of TA and the requirements of the TA 101 course. I thought to myself, "I certainly did not have that much content in my introductory course." My introductory course lasted three days, which was definitely longer than the 12 hours set as a minimum. However, some concepts were still foreign to me. For example, I did not know anything about rackets and racket feelings, though it is a regularily used concept.

Later, a teaching Transactional Analyst said to me that trainers agree in principle that one cannot teach all the required content within the suggested time for the 101 course. I agree with that from today's point of view.

In 2012, I decided to start a long-term education in order to study Transactional Analysis. TA convinced me in several ways:

The three-year training as a TA consultant meant a longer commitment for me. Since I was previously a fast-paced type and also interested in quick results, I didn't find it easy to decide for the training. But I noticed that mentally I was not on the level I wanted to be. It took a longer-term path - not just a rapid psychological like NLP does. To me, TA seemed to be the appropriate method.

At the end of 2012, I moved from Hamburg to Berlin to begin my training as a Transactional Analyst. We started in a group of about ten people. My trainer Rainer is trained in the field of psychotherapy. But TA serves three more fields:

However, this is not relevant for the first three years as only later you have to commit yourself to one field. During the training weekends, personal topics had priority over content. So we had a good share of group therapy. The basic concepts flowed in again and again. I noticed during training that no quick miracle cures were to be expected here. A fact that frustrated me at first. On the basis of small everyday situations we worked on the tiniest details. I wondered why the participants didn't address their big topics in life and I thought I was in the wrong place here.

Grass Doesn't Grow Faster by Pulling on It

For the first two years, I suffered from the apparent slowness and the small pieces of education. In the meantime, I also thought about canceling it. But in the third year, something changed. In fact, we were not slow at all and the small things had made all the difference. I understood that it is exactly these small details, that influence the everyday life and with them also your whole life enormously. Due to the many processed, seemingly insignificant situations, the larger topics came to light and were being solved. By that time, I had considered the basic assumptions of Transactional Analysis (e.g., "People are OK") to be just empty words. But now they filled up with life. I noticed how many times I had thought that people were not ok and how, with my disregard of this basic assumption, I kept getting into uncomfortable situations. Here is a video about the basic assumptions of TA:

By learning Transactional Analysis I had more and more the opportunity to make new decisions in the corresponding situations. For example, when I made fun of someone, I went against the basic assumption, "People are ok." Because with my jokes I didn'r allow the other person to be ok. If I caught myself violating it, I blamed myself in my thoughts, and once again violated the assumption. But this time the offense was directed against myself. I condemned myself instead of others. But I also belong to the people who are ok.

Nowadays, I hardly ever make fun of other people and if I do, I can be gentle with myself. I have filled the basic belief "The people are okay" with life. For me it's one of the hardest basic assumptions to make, though it sounds so simple. Unfortunately, I had learned nothing else but to value myself higher by depreciating others. I do not like that, but every person has a different starting point from which to develop. Mine was that one. It was right and important for me to accept this fact. When learning Transactional Analysis, I realized that there is another way of treating myself and others.

At the end of the three years I reflected in my thesis on my path with Transactional Analysis. I had set myself annual goals, which aimed primarily at the development of my emotional world:

- Goal 09/2013 to 09/2014: be able to clearly name my feelings, understand and know where my feelings come from, stand up for me and my needs, even against resistance, to show myself

- Goal 09/2014 to 09/2015: To serve longings, to reduce vanity, to be able to work in an integrated way, to develop fulfilling relationships, to deepen relationship with myself

These are my original goals as I put them. It can be seen that the development of the emotional world has become much more refined over the years. While at the beginning I had set an undefined goal (because I did not know any better), the topics are much more differentiated later on. I gained much more insight into my emotional life and understood one thing for me: Grass doesn't grow faster by pulling on it. It's the same with human development: the soul needs time to process old injuries. Especially when a lot has accumulated and and it was well hidden in the subconscious - rightly - to keep one's own psychic system stable. It consequently takes time to process the collected information. For me, the process is not finished yet. It doesn't have to be. I give my soul the time it needs and keep working on it.

4. That's Why I Developed my Own Transactional Analysis Course - to Learn TA in a Structured Way

I had wished for more clarity and structure throughout my Transactional Analysis training. But I didn't find anything that would have seriously met my need. That's why I decided to create my own TA course, so I would finally have clarity.

Together with my partner Jürg we have created the basic course Transactional Analysis, which also holds the opportunity to get your TA 101 certification. With it you get a well-structured and clear introduction to TA, just like I had wished to have back then. In addition, we have designed the course so you can learn Transactional Analysis parallel to your job or dailyl ife. You get to know the concepts in depth, which immediately adds value to your current life. Get informed here! If you opt for a longer-term education in TA, the learning modules help you to keep track and prepare you for the topics in a very short time. All with short, appealing videos, true-to-life examples and overviews.

Transactional Analysis has become a way of life for me. Its basic belief, combined with excellent concepts, helps me to assess situations every day. It helps me to constantly reorient myself, to reposition myself, to keep myself new and to stay in the here and now instead of spinning old stories. TA has a development goal - personal autonomy. It consists of:

With this development goal I can identify myself 100%. That's why I will continue my training in Transactional Analysis.

What interests you in Transactional Analysis? Write me in the comments! I answer every comment personally.