Transactional Analysis Examples - Get Practical Exercises to each Concept

You will get a brief explanation of the concept followed by the concrete example. To make it even easier, I created a menu that allows you to jump directly to the corresponding example. Of course you can also scroll through the page step by step. If you want to know more about Transactional Analysis, you can click here. Have fun!

Ego states are a concept that helps you analyze in which state you and other people are in. It consists of:

Kathrin posted this example: There is a bad working atmosphere in the team because one member of the team constantly goes into devaluation and speaks from the critical parent ego state to colleagues. Each team member reacts differently to this behavior: Some adapt and bottle up their frustration (adapted child ego state) and some are even stubbornly like a child. Others, for their part, react from the critical parent ego state and like this provoke a lot of arguments. In any case, it helps to make the team's communication structures transparent and to communicate from the adult ego state. When coaching of the affected individual(s), it helps to find out what causes lay behind this and to practice a different behavior. The mood in the team should become better.

Kathrin has another example: In a relationship, one partner permanently goes into adaptation (child-ego). He wants peace and relaxation in his free time, the other wants action and new experiences. When enough trading stamps (suppressed frustration) are collected, the "adjusted one" bursts and accuses the other one of always getting his will. With the help of the TA, both can hopefully be able to discuss their needs from the adult ego state.

Thank you for this contribution, Marion: I take other people serious (adult ego state). The frightened colleague says after a  storm, "I thought the roof is falling on my head." (adapted child). When I ask, "So, did it fall?" (adult ego state), she begins to think, and we're both in here and now (adult ego state).

You want more examples of this concept? ​Click here and get to the main article about ego states.

2. What is a Transaction?

A friend enters the rooms and asks: “What time is it?”

You answer: “It's just after seven.”

A game is a set process with a hidden motive that may not be accessible to the consciousness of the other person and that is revealed only when the participants change their behavior (role change in the drama triangle). The outcome is a feeling of misunderstanding and confusion of everyone involved.

He wants the attention of his partner. But maybe he is not even aware of that. It just becomes obvious through how he begins to taunt and tease her. She actually doesn't like this kind of rapprochement, but laughs at the beginning. This is ok for a little while. After some time though, it is enough. She changes from being the victim to the persecutor and shouts out: "That's enough!" He is quite perplexed and feels hurt. She's mad.

Someone who often fails to perform tasks assigned to him plays "kick me." The corresponding complaining part plays "Now I got you, you bastard".

“Yes, but” plays somebody, who complains about a personal problem and then blocks his argument and seemingly justifies his complaint with the statement "Yes, but ...". With this behavior, the player shows his advisors that they are not superior to him.

"Turmoil" is the name of another game. A fight is provoked to avoid intimacy.

The denomination of a game is nowadays not the focus anymore. It is rather the recognition of the process, i.e. the structure of the game, that is crucial.

You want more transaction examples? Let's take a look at the drama triangle.

The drama triangle consists of the following positions:

You start in one position and switch to a different one after a certain time. This can create tension as shown in the following.

Maximilian has this example: We have to give a group lecture. I play the rescuer in the group, offer my help and do the work of others. In doing so, I diligently collect trading stamps (a hidden frustration that is not lived out). In the end, I accuse everyone that I always have to do everything.

Does one of the following statements maybe provoke a "yes" inside you?

If any of the statements resonate with you, you're likely to exploit yourself in certain situations. You use more energy than you should.

Behind this lies the transactional concept of inner drivers. There are five essential drivers:

In my online basic course you will learn more about the inner drivers and the other main concepts of Transactional Analysis. Plenty of lovely animated and knowledge-intensive videos. No blah blah. Exercises and overviews. Everything you need.

Examples Transactional Analysis: Let's have a look at the passivity concept.

The concept of passivity describes how people manage to not solve certain problems.

An employee cannot concentrate at work because the blaring radio of the colleague distacts him. Instead of paying attention to his own needs and, for example, asking the colleague to turn off the radio, he stays silent and accepts the constant disruption. Only to not provoke conflict. The passivity concept could help him to do more for himself.

I had a date with a woman last week. While eating she says to me: "Surely you are one of those guys who walk around Berlin wearing a Hugo Boss suit and thinking they can have any woman they want. Just because you have money."

I had to smile a bit. I thought, "I actually had a Boss suit once. I bought it for the funeral of my grandfather and then sold it again. And really? I could have any girl? I did not know that. Oh, and I have money? Good to know."

Then I showed her my cat purse and asked her, if I had this in my Boss suit. She had to laugh. I'm sitting in a brightly colored shirt wearing flip flops. 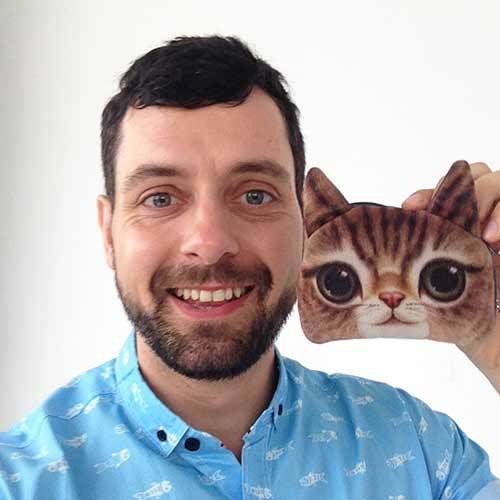 Where do I want to get with this?

I'm certainly not the man she described. I studied social sciences and status symbols like Hugo Boss suits do not interest me. At home I ride a ladies' bike, because getting on and off is so easy.

She projected a picture on me that I could not identify with. She painted me with the same brush she probably did with all men. This works like a filter. It scares off certain men and attracts certain other men. With such a filter, she probably conjures a prophecy. We can also say: her life script is active.

The life script in Transactional Analysis describes an unconciously designed life plan of ours. It includes a view of us, others and the environment.

Inspired by the experience with the woman, I start watching my thoughts when I meet new people. Last week I gave a workshop on the drama triangle. I look at one of the participants and I think, "He looks pretty soft." I watch my feelings on this thought about him and notice how I have no desire to deal with him. His facial features are very soft. This leads me to believe that he is also soft in character. Whatever this could mean.

A few days later he approaches me. I immediately remember the soft-looking face. I decide to set aside my rating on him for now. We engage in a conversation. He is also a coach. We arrange an exchange and I have to say: He is not at all soft in his personality.

At his point, I had been tricked by my hasty assessment. Had I followed my first thoughts about him, I would have missed a great opportunity to exchange. In this case, I would have conjured up a fate - I would have avoided a profitable exchange.

Get to the article about life script here. (Click here!)

These were the examples of the many concepts of Transactional Analysis. I hope they have been helpful.